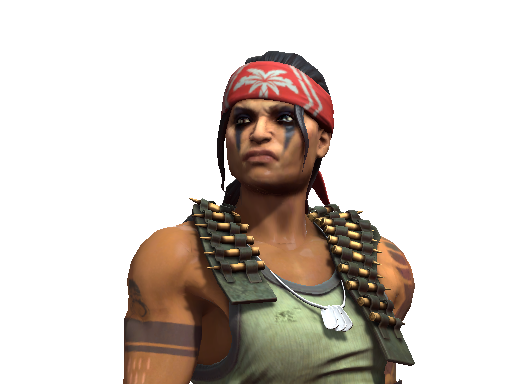 Description: A notorious rebel and brilliant improviser, Vypa is one of twelve sisters born into poverty and left to fend for themselves at the age of seven. Vypa's solo attacks against her country's military dictatorship were so prolific the military assumed her work was the result of a small team of people. At one point, Vypa mistook a remote Guerrilla Warfare (GW) training ground for a government outpost. Shortly after invoking one of her infamous 'sting and choke' maneuvers on the camp she realized her mistake, but not before she had Capt. Crasswater tied up to a tree and threatened at knife point. Impressed and a little frightened, Crasswater recruited Vypa and her sisters into the GW. Together they now lead all jungle-based GW missions and 'government awareness' campaigns.